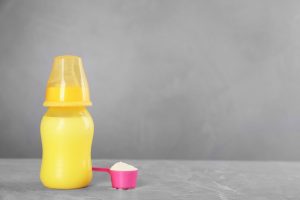 A family is reeling over their newborn’s six-month hospital stay after ingesting Enfamil baby formula. The mother of the infant has since filed a necrotizing enterocolitis (NEC) injury lawsuit against Mead Johnson, the makers of Enfamil. She alleges that the cow’s milk-based formula led her child to develop the serious intestinal condition and may have sustained lifelong injuries.

The lawsuit claims that Mead Johnson did not provide any warnings on Enfamil’s labeling, website, or marketing materials that indicated the risk for NEC in preterm infants; nor did Mead Johnson communicate to consumers that human breast milk, donor milk, and human breast milk-based formulas were safer for preterm babies than cow’s milk-based products.

The lawsuit also states that the child, who was born at 29 weeks gestation at Johns Hopkins Hospital in Baltimore, developed symptoms indicative of NEC mere days after the baby transitioned to all-formula feeds. The infant had been ingesting a combination of only breast milk or breast milk and formula for the first few weeks of life. The child experienced respiratory failure, sepsis, and abdominal distention leading to two open-bowel surgeries, undergoing six months of hospitalization.

Other lawsuits have also been filed claiming similar allegations against makers of Similac infant formula. Abbott Laboratories, maker of Similac, and Mead Johnson were recently hit with an NEC wrongful death lawsuit after a North Carolina infant died at only 11 days old. The child developed NEC after being fed defendants’ formulas while in the NICU.

As far back as 1990, studies have shown that babies exclusively fed formula were far more likely to contract NEC. Yet plaintiffs across the country claim that Mead Johnson and Abbott Labs have wrongfully passed off their infant formula as a safe alternatives to human breast milk.

May I File a Baby Formula Lawsuit for my Child?

If your preterm baby was given Enfamil or Similac formula while in the NICU and was diagnosed with NEC that required surgery, caused ongoing problems, or resulted in death, please call our law firm today. You may be eligible to file an Enfamil lawsuit or a Similac lawsuit. Grant & Eisenhofer P.A. attorneys can evaluate your potential claim with you during a free consultation.

Our lawyers take cases nationwide. Call us at (888) 984-7988 or fill out our contact form to speak with an attorney about your potential case.